Many horse conchs are very knobby, as in the photo below, which come from Wikimedia Commons. In this vintage photo it’s clear to see the bumps at the top of the shell. 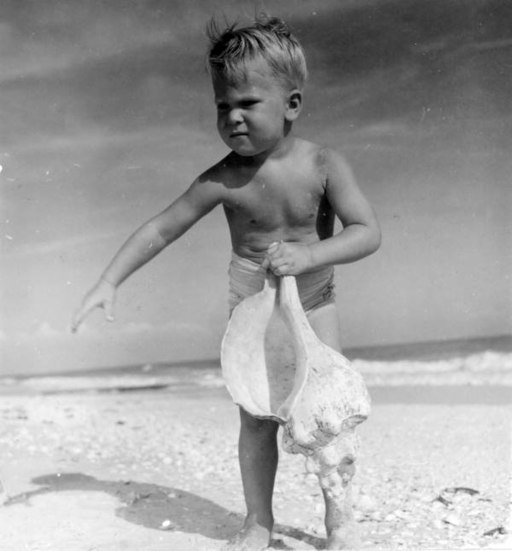 Check out this horse conch photo from the Bailey Matthews Museum showing how knobby a horse conch usually looks and compare the image to my photos below. At the museum they go on to mention the “knobless wonder” on that same page which “lacks nodules” and can be found in southwest Florida. Well, I don’t live in southwest Florida. I live on the central East coast. I don’t think I’ve ever found a large horse conch shell with big knobs.

The horse conchs above were photographed and put back into the water where they were found. The one on the left has a snail inside and lots of barnacles and such on the outside. The second photo was one of the first horse conchs I found while boating. It had living creatures attached to the outside of the shell and was encrusted inside with all kinds of things, but the snail was gone. I got some photos and left it there. Neither shell seemed to have the obvious “knobs”.

I don’t usually get to collect horse conch shells, and only have two, and they are big. They measure 10 and 16 inches in length (in photos down the page). It was just lucky that I have those because most big horse conchs we come across while boating are alive. I love to see the living snail. Sometimes they are buried in the mud awaiting the incoming tide, like in the photo on the right below.

The brown or black coating (called periostracum) that encrusts the shells is difficult to remove. It’s best to let it dry up and flake off on it’s own, which takes time. This is what I did for the two shells here. Below are comparison images from when the shell was found to now. In both instances it’s been a couple of years since they were collected and some coating remains.

The ten inch horse conch shell below has some bumps farther up the spire, but they are not as pronounced as some horse conchs. I cleaned this shell the best I could and eventually the coating peeled off, but not all.

How the Horse Conch Snail Moves

The huge, orange snail, which would have lived inside this shell, would be moving forward using the smaller end of the shell. When I look at a shell, I think of the pointed spire at the “front”, but that is really the back as he moves. This video is a good one for many reasons, but you can see a big horse conch moving as it chases down a tulip shell for it’s lunch.

The snail’s foot is used to maneuver. The shell I have is quite heavy, weighing in at 3lbs. 2oz. which is pretty amazing when you consider it’s carried by a snail! But the horse conch is no ordinary snail, and they do have the buoyancy from being underwater. For more horse conch information, watch this short video by the Whitney Laboratory at the University of Florida.

I love the beautiful texture of the shells. This largest shell has become quite white, but it also has some mold from sitting outside in my Florida garden. I’ll attempt to clean it up and get more photos. The periostracum is still flaking off.

In the video link above, I learned that horse conchs can live to be 30 years old. This shell is about 16 inches long and the maximum is about 24 inches. I think this conch had a pretty long life in order to create a shell this size. Read the story about how I came to be the caretaker of this shell.

Shells Found on a Deserted Beach

END_OF_DOCUMENT_TOKEN_TO_BE_REPLACED

Deserted Beaches, Where and When