I don’t remember ever coming across a Spider Crab in my trips to the ocean or river (saltwater). I think I would have remembered this big, ugly thing.

While boating the other day, we pulled up to a quiet spot so I could get out and explore the shallows. This is my favorite thing to do. I get to see marine wildlife doing their thing away from the throngs of people.

The tide was high, or else there would be beach areas around this island. The water was still shallow enough to walk the edge in search of cool shells.

It’s not my favorite time to beach hunt for shells, but the water was clear so I walked up along this mangrove island, to the right in the picture above. The water on the left is just a shallow channel that dead ends, I think. The water was in the upper 70’s as I recall, so very comfortable.

I saw the normal crown conchs, pear whelks, lightning whelk, shark’s eye, and of course hermit crabs. In fact, I found a wide variety of sea life in this one area. More about that later. But as I slowly strolled through the shallow water, I spotted something crawling toward me!

Most everything I encounter while walking these shallows either ducks into it’s shell and hides, or scurries away. The exception is living mollusks which don’t do anything, but close up their shell. Once, a stingray didn’t seem to mind me, and that was scary. My encounter with the Spider Crab was different. This thing was walking straight at me!

He ended up walking past me up into the mangrove area. He seemed to be oblivious to the fact there was a human nearby.

Now when I began searching for “spider crab” facts online, I realized there is a crazy big Japanese spider crab. It’s leg span can be 12 FEET ACROSS! Thank God I didn’t wade into one of those, but luckily I was in Florida and not Japan. This was not my crab. The crab I saw was around ten inches across – and I’m totally guesstimating.

There are a few various types of East Coast North America spider crabs and I can’t identify the one I saw. The Portly (Libinia emarginata) has nine bumps along it’s back. The Longnose (Libinia dubia) has only six bumps. I couldn’t see this guy’s back at all to count any bumps.

What I did notice is that the crab I encountered has only eight legs and all pictures I’ve seen of spider crabs shows ten legs. This crab also appears to have no claws! Usually they would be on the ends of the legs in the front. Was he missing a couple of legs? And were they the legs with the claws?

I do know this:

I love to explore these offshore areas which are mostly untouched by man, but my photography skills are lacking. Often I get home and look at my photos and wish I had taken more, or looked more closely at what I’d found. Out on the water, with my iPhone, and the bright sun, I can’t really see any of my photos well enough to tell if they are any good.

Truthfully, the spider crab creeped me out. It was too much like a spider for my liking. I didn’t dare get too close. Now that I know about them, I won’t be as frightened if I see one again, but I’m doubtful of that happening. This is the first of it’s kind I have encountered in all my years of Florida beach-combing.

Coincidentally, I was in the process of using some vintage fish and crab images in my online store. So I had to use the spider crab image, which was created by James Ellsworth De Kay, back in the 1800’s. 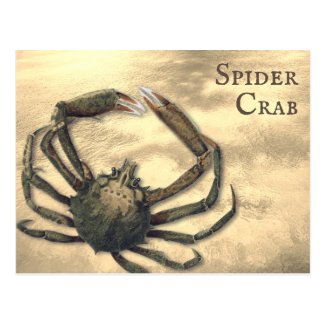 4 thoughts on “About the Spider Crab, Florida Indian River Location”