As I mentioned in a previous post I came across a collection of seashells which included large “helmet” shells. Or, at least, helmets were my best guess. I was not familiar with the helmet species, and I’ve had to do some research on the various helmets, especially the kinds found here in Florida. After much research, I have come to the conclusion that the shells I have are called Horned Helmets (Cassis cornuta) and are not found in the Florida area.

All photos on this page are mine, and they are of the horned helmet species although I refer to other types of helmets.

To begin my research I went to my three reference books, which are listed below. I will share some of the info gleaned from these books. If you are interested in learning more about seashells I recommend the first two. The Seashell Compendium is an old book and may not be available for purchase, but it does contain lots of shell photography from species collected all over the world and therefore is a helpful reference for me.

My reference book, Florida’s Living Beaches mentions the Queen helmet, also known as the “cameo”. Look it up by it’s scientific name, Cassis madagascariensis. In Florida it is most likely to be found around the southeastern part of the state and along the Keys. It does not mention a “King” helmet except to say that the Queen does not have a “central dark blotch” like the King (see the paragraph below). This book does not mention the Horned helmet at all.

My Audubon Society Shell reference book has a lot of info about the helmets and a few photos. I learned that the King Helmet (Cassis tuberosa) is smaller than the Queen. The King Helmet is brown in color with a large brown spot near the opening, and you can see it in the photo in the book, which shows the bottom of the shell as well as a view of the top. It also grows to be 9 inches tall, whereas the Queen can be 14 inches tall. The females are larger.

This book also mentions the Flame Helmet, but no mention of the Horned Helmet (which makes sense because it is not from this region).

As you can see at this link the family Cassidae shows helmet shells which are very rounded, without the protruding “spikes” found on my shells.

The cameo helmet, or Clench’s helmet, is also very rounded in appearance. Cameos were once carved into the shells because of the layers of light and dark colors, hence the name “cameo”. From what I see, these shells were also called “Emperor” shells. See photos at Jaxshells. So the Queen helmet is also known as the “Cameo” and the “Emperor”, from what I gather. See the image from Wikimedia below. 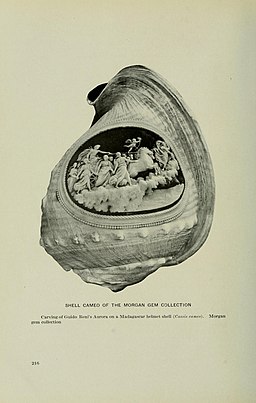 The Compendium of Seashells

A while ago I bought an older book called Compendium of Seashells which was first published in 1982. I found the book on Amazon and decided it would be a good idea to have more info when writing this blog. It boasts to be a “color guide to more than 4,200 of the world’s marine shells”. And believe me, it contains lots shells.

Sometimes readers will ask a question about a specific shell they have collected and it’s important to understand that there are many, many shells that look an awful lot alike. For instance there are 29 pages of Cone shells… yes, 29 pages devoted to the family Conidae! Each page has approximately 12 types of cone shell listed. For this reason it is not easy to figure out which shell is which!

The compendium does mention the Horned helmet shell. It says that it is associated with coral reefs and it is common, found in the Indo-Pacific region. This book shows more helmets called Cowry-helmets, but the only ones found around the state of Florida are the King (rare), Queen (also known as Emporer / Clench’s (old name) / Cameo), and Flame (Princess). To the best of my knowledge, this is my deduction.

The shells in the photos on this page did not come from the Florida area.

What I would consider the “back” of the shell is actually the front for the snail / mollusk. That upward tipped protuberance is where the snail would come out and pull the shell along (that smaller area). Both of these shells are broken in this upturned area. The snails eat sea urchins and sand dollars. Below is a video, taken in Hawaii, of a Helmet shell going after a sea urchin.

In Conclusion: The Horned Helmets

The Horned Helmet (Cassis cornuta) is from the Indo-Pacific area. All photos I have found online point to my two shells being from that region. That would explain no mention in my Florida seashell books. It means that the previous shell owner either bought them, or found them on her travels to the region. Of course someone could have given them to her as well. This is disappointing since I was hoping they were uncommon local shells which were collected years ago somewhere here in Florida. However, I have learned a lot writing this post.

As you can imagine, the helmets are much sought after for their beauty and as collector’s items. They are large, heavy and unusual so they are probably not easy to find these days out in the ocean. If you came across one, it would probably hold the snail that built it. Take a photo and let it live, if that is the case. I’ve come across many seashells I would love to have, but if they are occupied, they deserve to be left alone. In many cases it is also the law!

I have no idea how old these shells are or if their original color was brighter (probably). I washed them in water with a bit of ammonia and then put a light coating of coconut oil on each one. (Let the oil sit on the shell overnight and wipe off the excess.) The larger shell still has some stubborn green algae but I may clean it again at a later time.

No matter where the snails lived that built these shells, the specimens are extraordinary. I consider my self lucky to have seen them first hand.

To read more about the Cassis cornuta, please visit the Wikipedia page about the Horned Helmet.

Along with the helmet shells, the new collection includes murex shells (also not from Florida), but I did update my Florida murex shells page if you are interested.

11 thoughts on “Identifying The Helmet Shells”