Three of us in one tiny boat isn’t ideal, but it gets us out on the water. We go boating in the Florida backwater where my son Nick tries his best to catch a nice Redfish.

My younger son caught some catfish (picture) and I didn’t fish this particular day. I took the photos, because my goal was to find some awesome seashells.

Since I’ve moved back to Florida, it’s been mostly work and not much play. Summer in the sunshine state is for tourists, in my opinion. The rest of the year, when the weather is not as stifling, is for locals to enjoy. But tourists are here all the time, and the only way to get away from the crowds is to go boating – during the week.

Below: Yes, that’s our little Gheenoe, and it does hold three people! It can’t move very fast when it’s loaded down, but it’s fun to go out and explore. We have to keep an eye on those building cumulus clouds. Storms can build and move in fast. It’s not fun to try to outrun a Florida thunderstorm! (We’ve done it.) 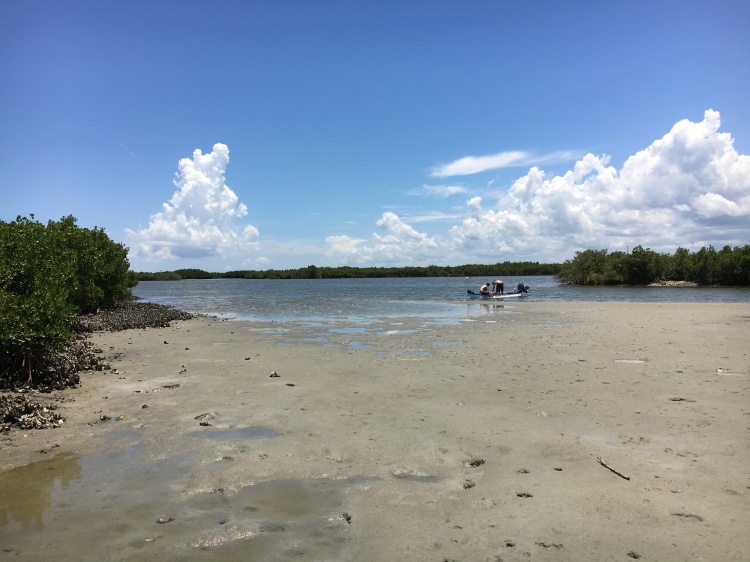 The day I took these photos it was terribly hot, over 100 degrees, but there was a breeze. Even the water was hot, and I mean very hot. I half expected that if we caught a fish it would be partially cooked already! The tide was out which made maneuvering the shallow channels a bit tricky, but my son fishes this area frequently and was pretty good at not hitting the sand bars.
Finally we stopped at Three Sisters, which is a set of three islands, one of which has a long sand bar on the northern side when the tide is low or out.

I found this giant Atlantic cockle shell (it’s name is “Giant”, it’s not really all that big) while walking in the hot shallow water on Three Sisters. Both sides of this bivalve were connected and it was upside down and filled with mud.  Since then, I have found a few more of these beauties, in exactly the same state – upside down in shallow water. In my experience, shells that are attached eventually dry out and come apart, but it’s fun to find joined bivalves.
I also found my prized big horse conch on Three Sisters.

4 thoughts on “Boating the Florida Backwater, Fishing and Shell Collecting” 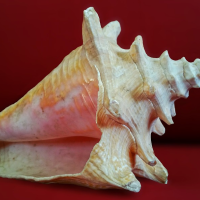