Because of all the bodies of water in Florida, viewing and enjoying that water has it’s own money-making opportunities. One unique way tourists can enjoy rivers and oceans is the “glass bottom” concept. With so many springs in Florida’s rivers, many of the state parks contain “Springs” in their name.  Those springs bubble crystal clear water up from underground to create the clear water needed for a great underwater view from a boat. (They also make a great place to swim as the water stays a cool 72 degrees in the heat of summer.) 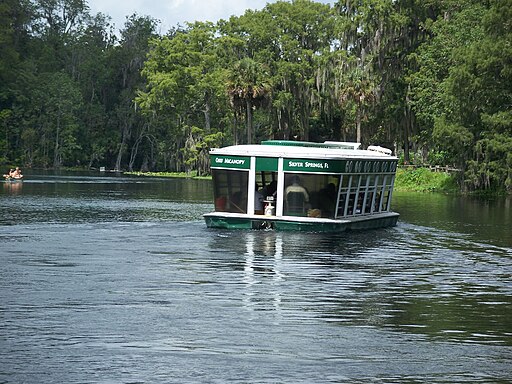 Way back in the 1980’s, shortly after I had moved to Florida, there was a creepy glass-bottom boat story. One day, as visitors were taking a tour at one of the springs that offered such rides, suddenly the partial torso of a man glided beneath the glass! He had been diving and an alligator had eaten half of him.  I think it was a news story enhanced a bit for interest, but those alligators are dangerous.

I believe that Silver Springs was the first to offer the Glass Bottom Boat ride.   Silver Springs (near Ocala) was a popular tourist attraction because some old Tarzan movies were filmed there. It is rumored that some of the monkeys escaped from the set and now Their offspring play in the trees around the Springs! The old “Sea Hunt” television show was also filmed at Silver Springs State Park.

In the northern part of the state, near Tallahassee is the Wakulla Springs State park which also offers glass-bottom boat rides.  It’s suggested to call ahead as water clarity conditions can cancel the tours.  Read more at my link.

But there are other boat trips that offer a view beneath the ocean water.   Down south in the Florida Keys, the John Pennekamp State Park has it’s own 65 foot catamaran that can hold up to 130 people.  The tour takes you out to the coral reefs in that area.  This definitely sounds interesting.  In my search for glass bottom boats, locations in Key Largo and Key West also popped up.

If you want to plan something a little different for your Florida vacation, keep the glass bottom boat ride in mind.