The Surf Shop on Flagler Ave.

My trip to Florida was a good one. I had a chance to visit with my son and go out on his boat, but the weather was not the greatest.  Although my son had warned me that there had been a lot of rainy days, I expected more sun than rain.  It’s the sunshine state!  I lived there for 27 years and got sick of the sun because there was so much of it!

The afternoon thunderstorms refused to wait until the afternoon.  We tried to go fishing and one day only spent 30 minutes out when the dark clouds forced us to trailer the boat and head home.  We got caught in a deluge on of those days as we raced for shore trying to beat the black sky that was moving in.  But this page is about another visit to the water.

This is the surf shop story.  These events took place when we visited New Smyrna Beach.  We had planned to relax in the sand, soak up some sun, collect seashells, and give my younger son some boogie boarding and wake boarding time.  The wake board needed wax.  Flagler Ave is a pretty busy place, but my son was able to grab a parking spot right in front of Quiet Flight surf shop.  He parked where you see the silver car in the photo above (which I took as we later exited the rainy beach).  There was no line of people returning their rented surfboards (that came later when the rain showed up), and we figured on a quick ‘pop-in and buy some wax’ visit.  As luck would have it, my older son was stepping out of his car, and his flip flop broke.  It was unwearable.

Now I ask you, what better spot to have your sandals break but in front of a store that sells them?  He hobbled inside and got himself a nice new pair of black flip flops.

We went on to park down near the jetty where we were able to enjoy a couple hours of fun before dark clouds began building from the north.  We headed home with a bag of shells, bloody knee (wake boarding fall) and new shoes.  Ahhh, vacation memories. 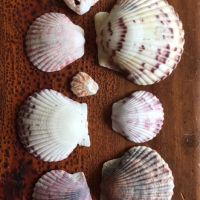 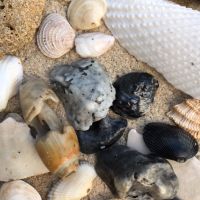 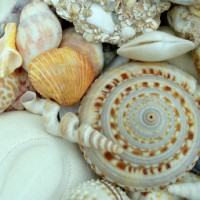 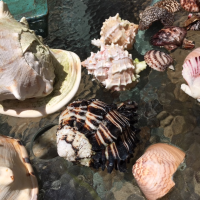 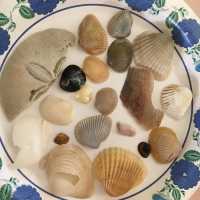